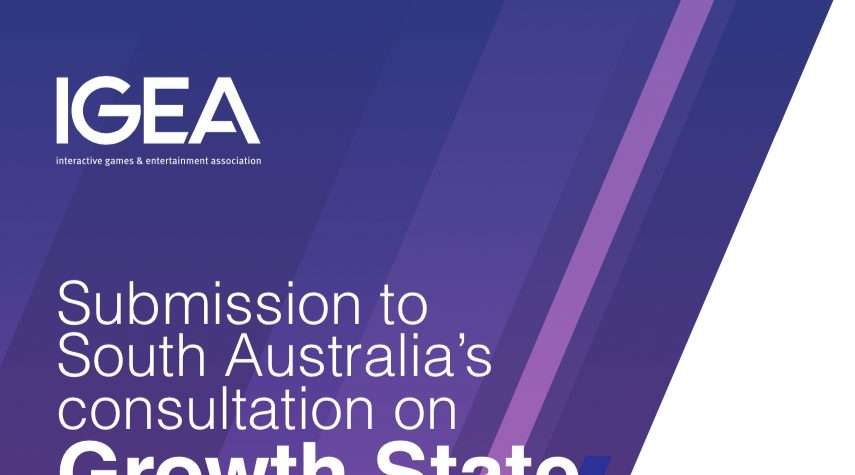 IGEA has made a major submission to the South Australian Government as part of its Growth State consultation process. Growth State is the South Australian Government’s plan to promote industry growth by leveraging the State’s competitive advantages. Creative industries were identified as a priority growth sector and representatives of numerous sectors were invited to be part of the development of an industry-led strategy for their sectors.
Our submission celebrates the achievements of South Australia’s games industry – the state is home to, among others, Australia’s largest independent studio, IGEA member Mighty Kingdom, and Sony Interactive Entertainment’s engineering office – but also points out the state’s challenges such as having to compete with neighbouring Victoria for business and brains. It puts these challenges into an even sharper focus by comparing the Australia games industry to the industries of other developed economies such as Canada, the UK, and Scandinavia.
This serves as a basis for recommendations on how to best support and grow the South Australian industry.
We commend the State on its existing support mechanisms but also point out their inadequacies and biases: despite an ever-increasing convergence between the sectors, only the post-production, digital and visual effects (PDV) industries qualify for tax rebates, a mechanism that allowed the sector to grow significantly and attract a 100 per cent increase in expenditure over two years.
Accordingly, the submission elaborates on the tried and proven benefits of expenditure-based incentives such as a percentage offset, credit, refund or rebate for game development and highlights successful overseas examples as this kind of incentive is the common denominator for how Canada, the UK, the US and countries right across Europe have built multi-billion-dollar game development industries
The submission ends by outlining further key support mechanisms that should also be considered, including a holistic government approach to working with the creative industries, attraction funding to encourage other major studios to Australia and a payroll tax rebate to encourage studios to hire and grow.  We hope this submission is the start of further meaningful conversations and will result in tangible outcomes for our South Australian members and the wider games industry.
@ronki
@ralesk
@benjjau
@JensSchroeder

Hi, I thought this article might interest you: IGEA Submission to the South Australia's Consultation on Growth State https://igea.net/2020/03/igea-submission-to-the-south-australias-consultation-on-growth-state/