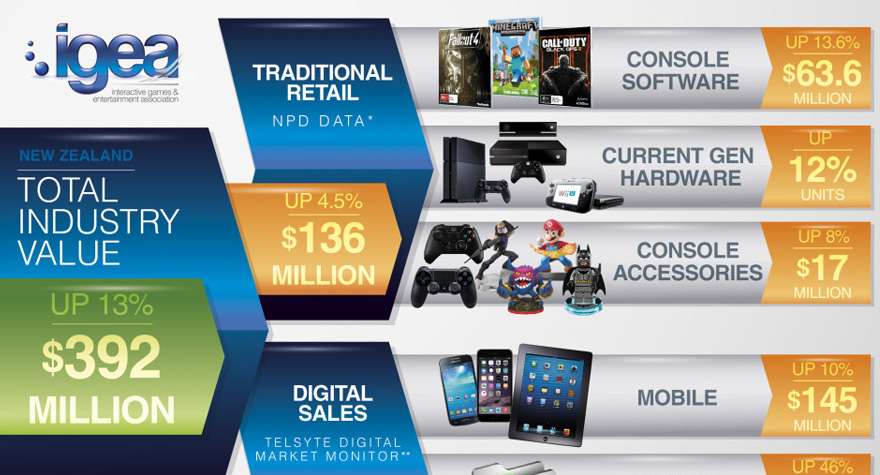 Market data from NPD Group attributed the steady growth of software and ancillary products, including accessories, interactive toys and games, and subscription cards, to the rapid adoption of the current generation console hardware.

“The robust growth of New Zealand’s video games industry is testament to a strong gaming culture. Telsyte’s research shows that New Zealanders are keen on early access to games, with one in four buyers willing to pay in advance to play a game before the official release date. While there is no doubt that there has been diversification in the games market, retail sales were also strong,” said Ron Curry, CEO of IGEA.

The ubiquitous availability of games and games content is very much the bedrock of the industry’s growth, along with consumers’ enthusiastic engagement across a wide variety of devices. The increased growth across the bulk of sectors, most notably within console and mobile gaming, offset a slowdown in areas such as hardcopy PC games. The innovation and variation within the industry stands it in good stead for further growth as the world’s largest entertainment industry for years to come.

“The New Zealand interactive games industry continues to flourish on all fronts cementing itself as a key segment of the entertainment industry. New Zealanders’ appetite for digital downloads of full games has grown strongly and is set to make up around a third of all games sales by 2016,” said Foad Fadaghi, Managing Director, Telsyte.

IGEA has provided a review of the state of the video games industry in New Zealand since 2009 using commissioned research from NPD Group New Zealand. With the rapid growth in downloads and mobile gaming, the NPD data has been augmented with research from Telsyte to provide a complete view of the New Zealand interactive games and entertainment industry.

The IGEA is an industry association representing the business and public policy interests of Australian and New Zealand companies in the computer and video game industry. IGEA’s members publish, develop, market and/or distribute interactive games and entertainment content and related hardware including mobile and handheld games.