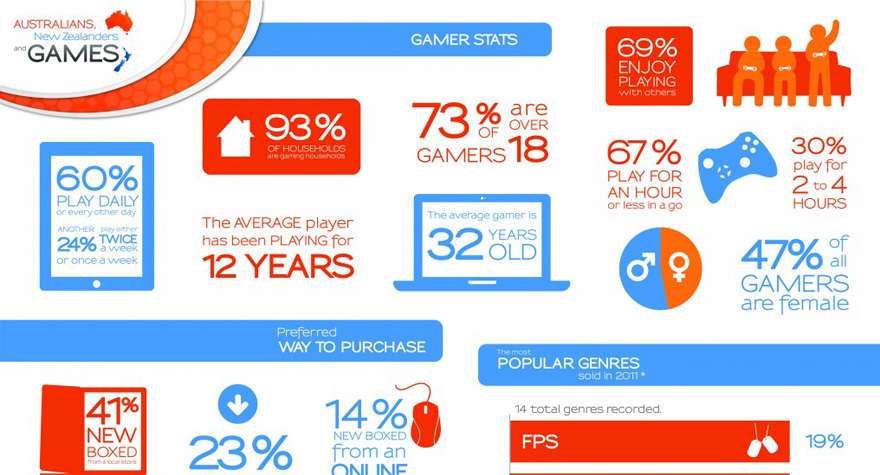 We’ve put this Infographic together to give you a snap shot of the latest statistics from the DANZ12 Bond University Report.

As featured in the BRW, Australian Game developers have started working on their own IP and taking advantage of the boom in digital distribution of gaming.  The industry looks very different to how it looked five years ago and it is great to read about all of these success stories.

Sydney, Australia – 19 June, 2012 – The video games industry has today welcomed the introduction of an R18+ Classification for video games with the legislation passing through the Senate with bipartisan support yesterday.

The news follows 10 years of hard work from industry organisations, specialist press outlets, retailers and consumers that have strongly supported the introduction of an adult classification for games.

According to Ron Curry, CEO of the Interactive Games & Entertainment Association, while this legislation is long overdue, the success of an adult classification for video games will depend both on the states and territories following suit as well as a set of classification guidelines that adequately reflect an adult rating.

“Key to this rating has always been the notion of harmonisation and while the amendments to the legislation are a true milestone, we need to be cognisant that we still require the timely support of all states and territories as well as workable guidelines to underpin a successful classification system.”

“One of the key arguments in this debate is that we need a consistent classification to better equip all consumers in an increasingly global environment and where the digital delivery of games is ubiquitous. It would be very counterproductive to start splintering the classification system now that an R18+ rating has been passed by the Senate.”

“We would also like to acknowledge the Minister for Home Affairs, Jason Clare as well as the previous Minister Brendan O’Connor who have both been pivotal in ensuring that this issue stayed on the agenda and was given due and proper consideration, despite some intensive lobbying from a small, yet vocal, percentage of the community.”

“With an adult rating, we can now can now focus on the wider and more important issues that are impacting our classification system,” added Curry.

For media interviews or further information, contact Grace Gabriel on 0431 528 127 or at grace@espressocomms.com.au.

Interactive Gaming & Entertainment Association proactively represents companies that publish, market and/or distribute interactive games and entertainment content.  iGEA aims to further advance the industry and the business interests of its members through informing and fostering relationships with the public, the business community, government and other industry stakeholders.  iGEA is administered by a Board of Directors and supported by the CEO, Ron Curry.  iGEA was formerly known as the Interactive Entertainment Association of Australia (IEAA).