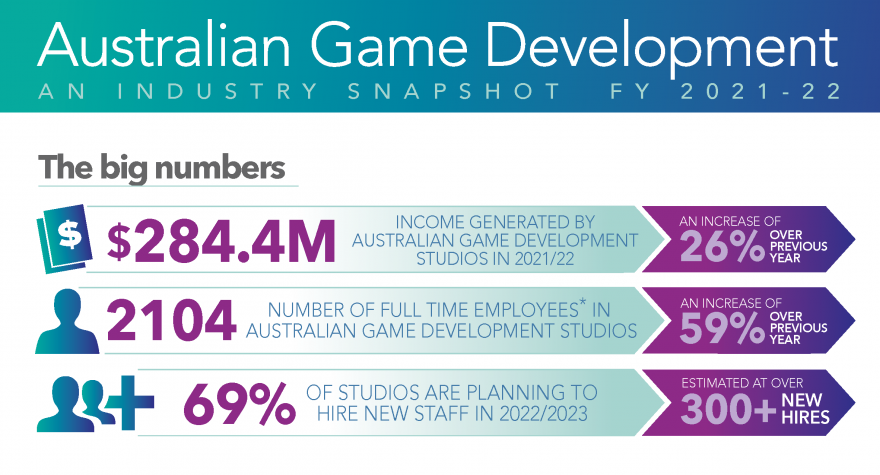 SYDNEY, AUSTRALIA, 19 December 2022 – The Australian video game industry has more than doubled in size in the last six years, according to the sixth annual Australian Game Development Survey (AGDS) from video games peak industry body, the Interactive Games and Entertainment Association (IGEA). With over 770 new jobs in the last year alone, the local games industry is expected to grow further this financial year due to increased revenue from existing and new products, and expanded state and federal government support which brings games into line with other creative screen sectors.

Since the commencement of the survey in 2016, the Australian video game development industry has seen a 148% increase in revenue with Australian studios reporting a 26% growth over the previous year alone. This has encouraged a sharp rise in employment to 2,104 employees, with 69% of developers expecting to hire this financial year, creating a minimum of 300 new jobs.

“The growth in revenue, employment and confidence in the local game development sector is fantastic. Businesses are maturing, studios are performing well, development teams are expanding and international companies and investors are taking notice of Australia.” said Ron Curry, CEO of IGEA. “State and federal governments are recognising the positive impact the local games industry has on the economy and are supporting the sector with tangible benefits such as the Federal Government’s Digital Games Tax Offset (DGTO).”

The development and maturation of the Australian game development ecosystem are highlighted by the age of local studios and the ability to expand teams and launch globally successful products. While one quarter (27%) of Australian studios are less than five years old, most local studios are between 6 – 9 years (48%), with 28% being ten or more years. Over 80% of the Australian video games industry has created at least one game.

“We see smaller studios comfortably expand into medium-sized studios, and larger studios grow to over 100 employees. Australia finally has the capacity to build and nurture a thriving games industry and game development ecosystem; however, these expanding studios are facing the key hurdles of gaining access to mid to senior talent, which is essential for these expanding studios and dedicated financial support,” said Curry.

According to the AGDS, the greatest challenge facing Australian game developers in the last financial year was hiring employees with specialised skills, potentially limiting the sector’s growth. Programmers and engineers are in the highest demand – heavy STEM-focused roles that require skills valued by other industries, including science, research, and education. Artists and designers were also among the top five roles sought after in the past year, and these roles are also in high demand from the broader, creative screen industry.

“To immediately address skills shortages in the local industry, we need to tap into overseas talent. Recent improvements to the worker migration system, commitment to the local games industry and the abundance of opportunity available offer strong reasons for skilled migrants to choose Australia. We also need to consider our future pipeline of talent. Students and school leavers should consider the games industry as part of their career path as it offers a diverse range of roles and pathways into other industries such as healthcare, technology and resources, all with huge global opportunities.” said Curry.

The survey also highlighted the lack of early-stage development funding, and funding more broadly, as a barrier to growth this past year. State organisations such as Screen Queensland have implemented grants for small-scale businesses, including the Games Grant, or the Originate Games fund from VicScreen. Still, the industry would benefit from further support to boost growth. Since the announcement in May 2021, the impact of the DGTO has been immediate, with the Australian development industry experiencing increased interest from international business, local developers confidently opening more roles across the market and increased investor engagement.

“In 2021 and 2022, Australia has seen continued international success with unique games and IP developed by independent or international studios in Australia. We look forward to seeing the Australian games industry develop and grow further, supported by the government and the right talent.”

To learn more about the AGDS 2022, visit the IGEA website or download the report and infographic here.

IGEA (Interactive Games & Entertainment Association) is the peak industry association representing the voice of Australian and New Zealand companies in the computer and video games industry. IGEA supports the business and public policy interests of the games industry through advocacy, research, and education programs and working with many stakeholders, including all levels of government, agencies, media and other trade associations. Further details are available at www.igea.net.

The Australian Game Development Survey is an independent survey undertaken in 2022 for IGEA by Bond University. The 2021-2022 survey was based on financial year data from 1 July 2021 to 30 June 2022. Over 400 studios were contacted to participate in the survey, with 102 studios completing it and providing usable data. Respondents were required to have an ABN and made or currently make video games.