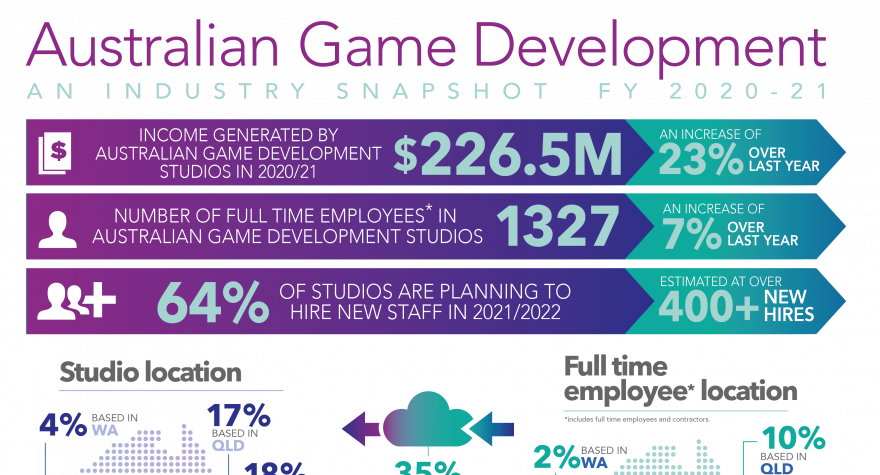 SYDNEY, AUSTRALIA, 14 December 2021 – The Australian video game development industry doubled its revenue to $226 million since 2016, according to results from the fifth annual Australian Game Development Survey (AGDS) 2021 released today from video games industry body the Interactive Games & Entertainment Association (IGEA). The survey measures the size of the Australian game development industry and revealed that the industry expects further growth locally, contributing to the growth of the global market, which was worth $AU240 billion in 2020.

“Five years ago, the Australian game development industry achieved $114 million in revenue and has grown exponentially since then to record over $226 million the last financial year,” said IGEA CEO Ron Curry. “The figures prove the potential and adaptability of the globally reputable Australian video games industry, and we need to capitalise on this experience while we can.”

The survey shows that over the past three years, the Australian game development industry has recorded year-on-year revenue growth of over 20%, with 2021 generating an increase of 23%, coupled with employment growth of 7%. Employment has grown by over 50% since 2016 to 1,327 full-time workers in the industry. 2021 has seen a vast improvement in gender diversity across the workforce. 23% of employees are (cisgender) female while 10% are transgender, non-binary, or gender diverse – a testament to the recruiting and talent attraction programs being implemented by Australian game development businesses.

However, Australian game developers’ most significant challenge is employment-related, with many developers still having difficulty attracting early-stage funding or accessing appropriate government funding. The main issue for employers currently is hiring employees with specialised skills; the global demand for experienced staff, closed borders and unfavourable migration programs are the main contributors to this. Additionally, Australia suffered a significant brain drain following the GFC, with many Australian skilled workers continuing to live and thrive in studios overseas.

Recent Federal Government support through the 30% Digital Games Tax Offset (DGTO) to be introduced in July 2022 provides the promise of game development reviving Australia’s economy, which has spurned additional State Government rebates in NSW and QLD. This injection of confidence from the Australian Government has encouraged multinational studios and investors to step up their activities locally and explore options to establish studios in Australia, creating the jobs needed to entice specialised workers back home or consider Australia a place to work.

“The support from the Federal Government is the engine that will drive Australian video game development to become a billion-dollar industry,” said Curry. “The local industry is poised to take advantage of the global growth in playing games and the realisation that games have provided a vital source of connection, enjoyment, education and wellbeing during the pandemic. We at the IGEA expect to see the video game industry contribute further to the Australian economy with the commitment to the provision of appropriate funding levers provided by all levels of government.

“While we congratulate the Government for introducing the DGTO, we continue to work with them to see the return of a fund similar to the cancelled Australian Game Development Fund, to garner support for our high potential independent development sector.”

IGEA (Interactive Games & Entertainment Association) is the peak industry association representing the voice of Australian and New Zealand companies in the computer and video games industry. IGEA supports the business and public policy interests of the games industry through advocacy, research, and education programs and working with many stakeholders, including all levels of government, agencies, media and other trade associations. Further details are available at www.igea.net.

The Australian Game Development Survey is an independent survey undertaken in 2021 for IGEA by Bond University. The 2020-2021 survey was based on financial year data from 1 July 2020 to 30 June 2021. The survey opened in September 2021 and closed at the end of November 2021. One hundred eighty-seven studios completed the survey and 400 were contacted to participate. Respondents were required to have an ABN and to have made or currently make video games.