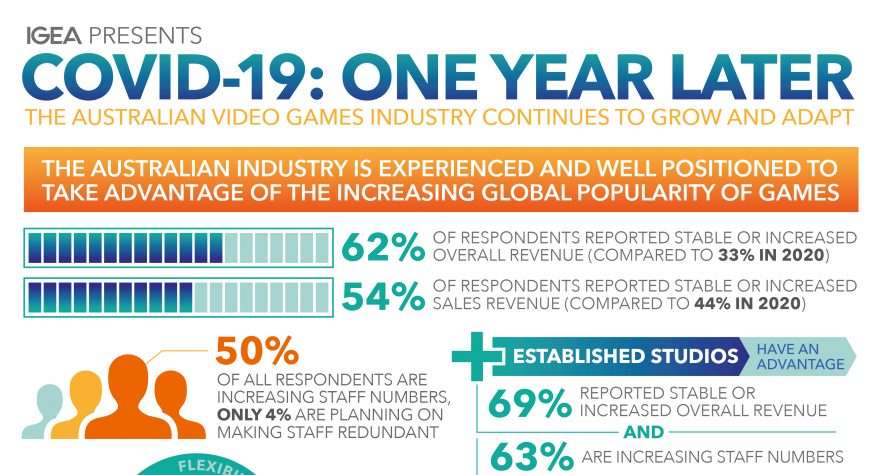 SYDNEY, Australia – 24 June 2021  According to the latest survey by the Interactive Games and Entertainment Association (IGEA), the Australian video games industry has remained strong throughout the global pandemic with the majority of local studios reporting increased or at least stable revenues over the last 12 months, along with enhanced employment opportunities.

As billions of global citizens turned to games to stay connected, many Australian game developers delivered high quality games that provided entertainment and distraction in otherwise uncertain and isolating times.

The industry proved its ability to be both flexible and adaptable. Given the digital nature of the creative and production process in game development, the transition to remote work was easier compared to other industry sectors. In fact, 60% of respondents have since moved to a hybrid model of work, balancing time between the office and home.

Hybrid work practices have also opened up staffing and employment opportunities, with 33% of respondents hiring talent from interstate and 28% hiring talent from overseas. What this means for talent re-location in the future remains to be seen, however coupled with the recent announcement of the 30% Digital Games Tax Offset (DGTO) as part of the Federal Government’s Digital Economic strategy, it sends a positive signal to game developers, games studios and Australian expats looking to make Australia their home.

Steve Wang, General Manager at Wargaming Sydney emphasised, “Now that we are fully flexible, hiring remotely has proven to be very workable for our studio. We have employed new staff from Queensland and New Zealand with no requirement to be in office.  Further to that, we have continued our internship program, pivoting to a remote offering.  We recognise this as an important contribution to early career practitioners. Our latest interns spend one week in the office with the team, and manage the rest remotely and to date this has been very successful for all involved.”

COVID-19 has also affected some revenue streams across the local games industry with 31% of respondents reporting a loss in contractual revenue. With no opportunity to travel, 61% of respondents reported that their businesses were negatively impacted and resulted in consequences such as the cancellation of contracts and projects; difficulty in business development and networking limiting the ability to secure future projects and/or funding.

Depending on the size and maturity of the studio, the 2021 survey results were mixed. For studios with less than 14 staff, the stability and increase in revenue was modest compared to larger studios, 32% versus 63%.  For independent studios with less than 10 staff, they were uncertain around hiring decisions in current market conditions.  The disparity in results across the size of studios emphasises the opportunity for State Governments and agencies to increase their support and make funding options available to these important creators who may not be able to access upcoming Federal games funding.

“IGEA’s latest survey findings confirm that the Australian industry is experienced and well positioned to take advantage of the increasing global popularity of games,” said Ron Curry, CEO of IGEA.

“The introduction of the DGTO in July 2022 injects certainty and confidence to our talented local market and those companies looking to invest in Australia.  The DGTO enables Australia to build a complete thriving local games ecosystem and ensure game developers both lead and shape the new digital economy.”

Media enquiries:
Media inquiries should be directed to igea@doublejump.com.au.

About IGEA
IGEA (Interactive Games & Entertainment Association) is the peak industry association representing the voice of Australian and New Zealand companies in the computer and video games industry.  IGEA supports the business and public policy interests of the games industry, through advocacy, research and education programs.

Notes about the survey:
The survey was circulated to Australian game development studios with results collected between 12 May – 7 June 2021.  The number of respondents was 52.