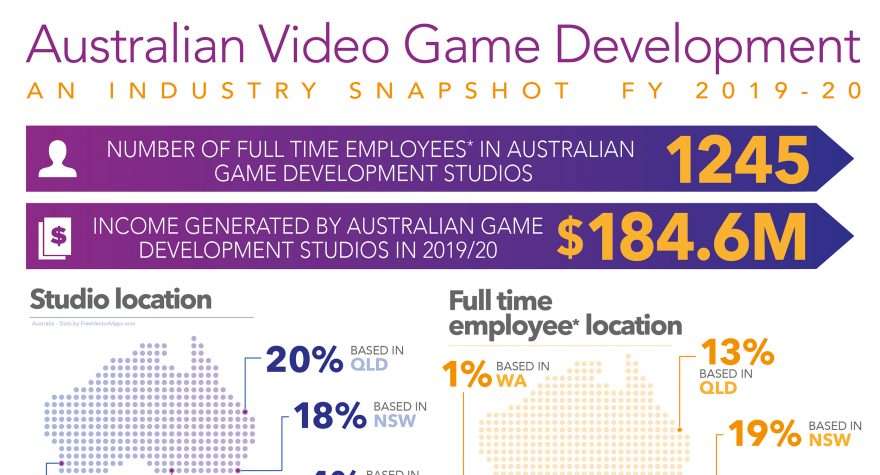 Sydney – 28 January, 2021 – The Interactive Games & Entertainment Association (IGEA) has released the results of the 2020 Australian Game Development Survey, showing the industry grew its revenue 29% since 2019 despite the impacts of COVID-19. The survey highlights the resilience of the Australian video games industry, which has the potential to become a digital manufacturing powerhouse having experienced increased growth despite limited government support and the pandemic.

The survey showcases the opportunity for the industry to thrive and act as a major contributor to Australia’s economic revival. It also shows the industry can capitalise on the growth trajectory of the most popular global entertainment medium if it can access appropriate Australian Government screen funding.

In cases where there has been state or territory support for the game development sector, the result has been commercial and international success along with vast economic benefits to Australia in terms of revenue, taxation and employment growth.

While the pandemic disrupted much of Australia’s workforce, the game development industry proved resilient by adapting easily to flexible and remote work environments and achieving positive financial results. The local industry employs at least 1,245 workers and contractors. 76% of survey respondents reported stable or increased revenue with 87% of the industry’s revenue coming from overseas markets, bringing in valuable export dollars.

The value of the industry is not just in revenue opportunities but also in jobs creation. 76% of respondents reported they would not be making staff cutbacks with 67% stating they planned to hire more staff in 2021. With 39% of Australian games workers comprising programmers, 29% artists and designers, and 19% in business-oriented roles, no other industry creates as unique a blend of technology, creative and commercial skills as video games.

The skill sets of those employed in the games industry have proven highly transferable to a number of industries, with game development talent being snapped up across diverse sectors such as film and TV production, education, health, business, defence and design.

Despite the positive figures, millions of dollars of potential revenue and broader industry growth are lost each year due to three main challenges identified from the survey: Lack of government support; problems in attracting early-stage development funding for new projects; and the ability to hire employees with specialised skill sets.

“Globally, video games were predicted to be a 250 billion-dollar industry in 2020, nearly 10 times the global music industry. The Australian game development survey shows industry growth is much larger in states with government funding, like Victoria and South Australia, and these states are likely to see further expansion due to the increased support announced recently. As people turned to games for entertainment and connection during the pandemic, established Australian studios took advantage of the increased demand and sold their products to the world. Imagine how much more the industry could thrive if game developers could access established incentives offered to other screen sectors,” said Curry.

Even though government agencies and entities have recommended support of the Australian game development industry multiple times over the last decade, including a Parliamentary Committee, Austrade, the Small Business Ombudsman and politicians on both sides in 2020 alone, we are waiting for the Australian Government to act.

“2020 has been a major disruptor to all industries and economies with game development emerging as a high growth sector. The Australian government has an immediate opportunity to embrace video games as they drive growth and fuel our economy, by supporting an industry that has already delivered results and offers boundless creative and high-tech opportunities.” concluded Curry.

IGEA (Interactive Games & Entertainment Association) is the peak industry association representing the voice of Australian and New Zealand companies in the computer and video games industry. IGEA supports the business and public policy interests of the games industry through advocacy, research and education programs, and working with many stakeholders including all levels of government, agencies, media and other trade associations. Further details are available at www.igea.net.

The Australian game development survey was an independent survey undertaking in 2020 for IGEA by Premium Research, based in Wellington New Zealand.  The 2019-2020 game development survey is based on financial year data from 1 July 2019 – 30 June 2020.  The survey opened in September 2020 and closed the first week of December 2020.  97 studios completed the survey and 340 were contacted to participate.

For an FAQ on the survey, please click here