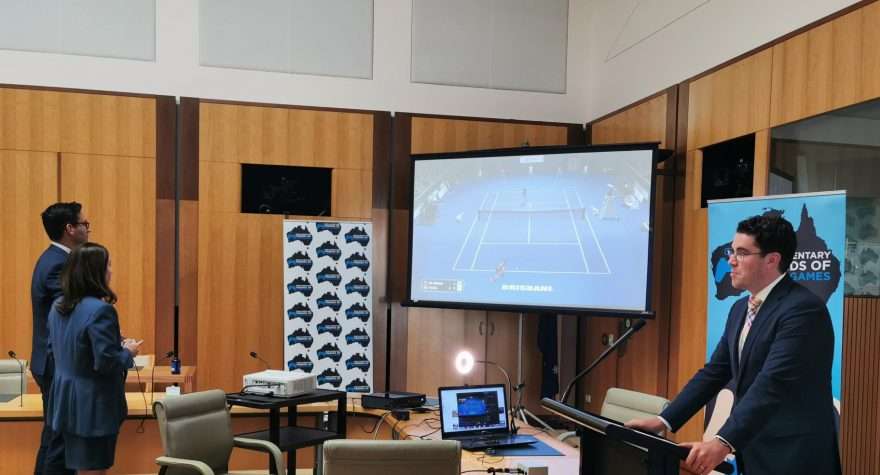 The group will provide a bi-partisan forum for the video game industry to engage with parliamentarians and raise awareness of the importance of the sector, which generates more than double the revenue of the music and film industries combined globally.

Launched at a Parliament House event last night, MPs and Senators from both sides of politics came together with industry representatives Interactive Games and Entertainment Association (IGEA) and Melbourne-based developer Big Ant Studios to hear about the challenges and opportunities facing the sector.

Parliamentarians had the opportunity to see what Australian game developers can do while playing each other in popular titles from Australian studios including AO Tennis 2, Untitled Goose Game and Moving Out.

Ron Curry, CEO IGEA said, “We couldn’t be more pleased with the establishment of the Parliamentary Friends of Video Games group. This is a first for the local games industry and highlights the support we have across parties. We know that billions of players around the world engage with games on a daily basis and we welcome the formal pathway Tim Watts and Senator James McGrath have created to formally engage with the Australian games industry and game players.

“We know there are many in Parliament who publicly or secretly love playing games and it’s fantastic they now have a forum to celebrate it. The group has already expressed a desire to ensure that Australia remains competitive on a global stage and takes advantage of all of the opportunities a complete video game development ecosystem will create economically, creatively and culturally.”

Tim Watts said the launch of the dedicated Parliamentary Friends group underscores the important contribution of the sector.

“We’re launching this group because of the huge economic and social impact of video games today. It’s a continuation of the great advocacy work IGEA has done in Canberra to date for the industry to be taken seriously.

“Australia is home to a talented, world leading community of game developers and publishers but lacks the scale of its peers in New Zealand, Finland, Canada, and the United Kingdom. While often overlooked in policy making processes, the video game industry is a dynamic, future-focused and digital industry that provides creative tech jobs and is almost entirely export-based.

“With the right policy settings, the video game industry has the potential to help drive the post-COVID economic recovery, creating jobs and opening up a significant export market,” Mr Watts said.

Senator James McGrath said he looked forward to working with his parliamentary colleagues and industry representatives to champion the sector and harness the potential of the video game industry as a job creator in Australia.

“This industry represents the fastest-growing media in the world and is a significant driver in the global tech industry,” Senator McGrath said.

“Australia has built a reputation over many years of producing some of the world’s best creative talent and I have no doubt we have a generation of innovative, technology-savvy developers and publishers who are ready and eager to grow this industry here, explore opportunities and export their products to the world.”

IGEA’s Game Engine advocacy paper, and numerous submissions to government consultations on screen and creative industries, trade and Investment inquiries can be found at www.igea.net