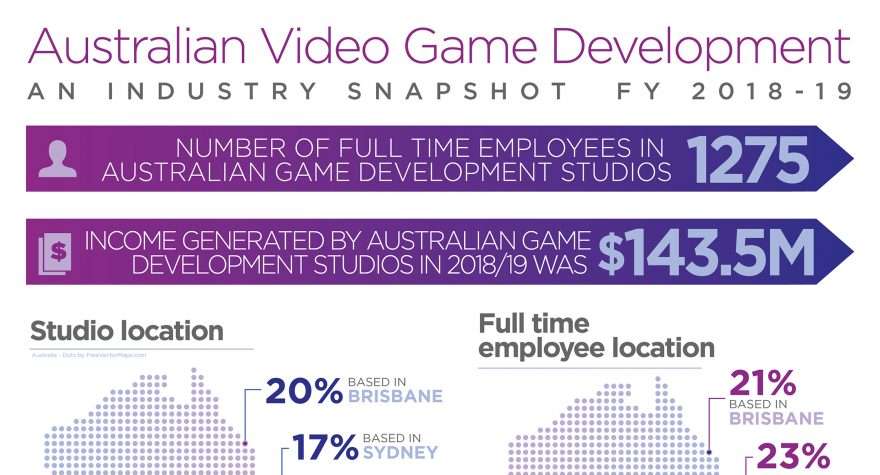 Sydney, Australia – 28 November 2019 – The Australian video game development industry continues to grow in size, drawing the majority of its revenues from exports while creating significant opportunities for skilled jobs locally, a survey of local game developers has shown.

According to the survey undertaken for the Interactive Games & Entertainment Association (IGEA), the Australian game development industry generated $143.5 million in the 2018-2019 financial year, up 21% since the last survey was conducted in 2017.  71% of the studios surveyed project growth overall, with 35% expecting “significant growth” in revenues in the coming financial year.

The local industry employed 1,275 fulltime equivalent employees (growing 37% since 2017), of which programmers (34%), artists (19%) and management, marketing and administration (11%) made up the majority. The number of organisations planning to employ additional staff is also growing with 61% of studios surveyed indicating plans for new hires, compared with 53% in 2017.

Australian studios are creative and focused with almost two-thirds (61%) of respondents exclusively developing their own Intellectual Property (IP). A further 28% develop their own IP alongside producing games and services for clients.

83% of the revenue generated by Australian studios came from overseas, up 3 points from 80% in 2017. There has been a marked increase in focus on Asian markets, with 65% of respondents developing for Asian markets, previously 37% in 2017. Other international markets include the US and Europe.

“The survey shows that the Australian game development industry continues to grow and succeed despite a lack of policies to support our industry that makes it harder to develop games in Australia than in almost any other advanced economy,” said Ron Curry, CEO, IGEA. “Games are not only important for their contribution to the nation’s economy and screen sector, they are also interwoven into the fabric of Australian culture, with two-thirds of all Australians playing video games.1”

“Despite this growth, the Australian video games development industry is still diminutive compared to our peers, with Canada announcing this month that its games industry employed 48,000 workers and generated AU$4 billion, which is more than 20 times larger than our sector.”

Asked about the main challenges facing their industry, respondents cited lack of government funding as well as difficulty attracting early stage development and expansion investment as stressful or very stressful.  Other challenges keeping developers up at night include internet speeds, despite the continued rollout of the National Broadband Network (NBN). Developers also cited the difficulty in securing international publisher deals as contributing to their stress levels.

The Australian game development industry is also rebuilding, with 55% of studios less than five years old. Given the challenges that local studios are facing with little to no start-up or expansion support from government, coupled with multinational studios looking to Australia as an option for investment, IGEA encourages State and Federal Governments to consider boosting investment and recognition of the sector to spur even greater opportunities

“The local games industry is already making gains and contributing millions to the Australian economy; however, we continue to be excluded from federal government screen grants and tax offsets, despite telling Australian screen stories and also having a much greater export potential,” said Curry.

The report can be found at this link

Accompanying infographics can be found here and here

The Australian game development survey was an independent survey undertaken in 2019 for IGEA by Tim Thorpe, based in Wellington, New Zealand.

To speak with Ron Curry, CEO of IGEA, or an Australian game development studio, please contact Natasha David from Espresso Communications on 02 8016 2200 or igea@espressocomms.com.au.