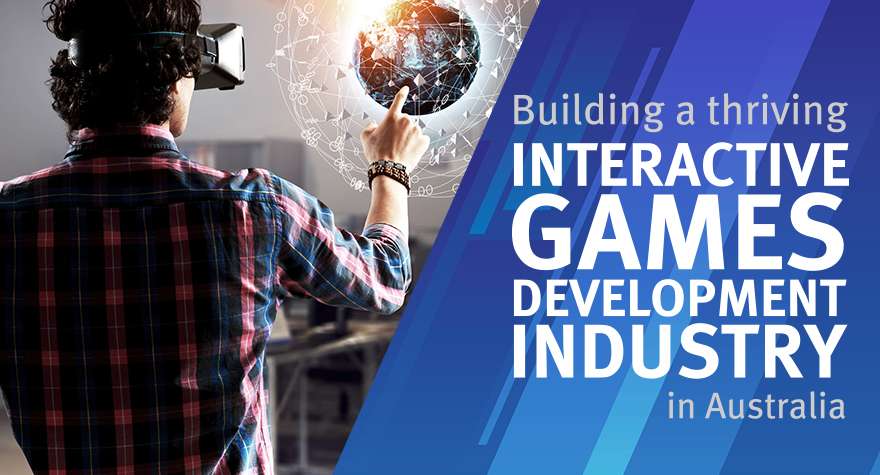 “More opportunities for Australia’s world-class screen industry”– boasted the headline from a press release issued on 11 April, from the office of Minister for Communications and the Arts, Senator the Hon Mitch Fifield.  “Well this is promising” thought Australia’s game development industry.  After all, the local industry produces, develops and distributes world class content on screens. “Fingers crossed”, we all said.

Then we read the opening paragraph, ‘Australia’s screen production industry will be boosted with television series and mini- seriesdistributed through online platforms now able to claim refundable tax offsets if they meet the other eligibility requirements.’

Just one paragraph into the press release and it’s unfortunately an all too familiar story the Australian game development industry. Familiar in the sense that the content Australia’s game developers create are distributed on global, well-known, online platforms.  Names such as Apple, Google, Playstation Network, Xbox Live, Steam and Epic would be as familiar to many Australian households as the names Netflix and Stan.  Unfortunately, the press release was also way too familiar in the sense that the Minister ‘forgot’ to include the word game (again) when talking about Australia’s screen industry and has (again) limited additional industry support to one type of content creation only, despite the similarities between games and films in reaching large, global audiences.

Determined to read on anyway, we encouragingly we see the ‘g’ word, that’s right, ‘game’, in the second paragraph, which sadly is unusual for our industry.  ‘The Morrison Government announced the game-changing decision that will make Australia an even more attractive environment for screen production and provide more opportunities for the thousands of highly-skilled Australian professionals working in the industry.’

So, when he says ‘game changing’  the game is actually staying the same – nothing changes for the highly skilled Australians working in the games industry locally and abroad who are already creating high demand content for screens.

Expectations appropriately lowered, we read on, learning that the government is committed to ensuring the industry can ‘capitalise on opportunities and attract more investment in Australian screen production’.

“Ah, Excellent”, we think, we know a growing industry, ripe with opportunity………

Now is probably the time to remind the government that the global games industry is estimated to be worth in excess of $AUD200 billion annually, continues to grow and mature and is bigger than films, music and books. Is this not an opportunity that Australia could and should absolutely capitalise on?

We could do this by simply extending Post, Digital and Visual Effects (PDV) and location offsets offered to other screen sectors, to the Australian games development industry.  A global consumer market of $AUD200 billion isn’t insignificant after all and allows us to also ‘capitalise on opportunities’.  Now that would be truly game-changing.

We celebrate the fact that ‘The Australian Screen industry is performing strongly and matching it with the best in the world.’  For the Australian film sector, this is certainly well deserved and expected after years of support and funding across all levels of government. In turn, the success of the film industry is (rightly so) celebrated with further government funding.

Our experience couldn’t be further diametrically opposed.  The message we get back from government when talking about successful, Australian-made games is “Games are doing well, you don’t need our help”.  Globally, maybe true, but we Australian companies need to be able to compete on the global stage, as do our friends in the film sector.

We reach the end of the release and the government acknowledges,‘Increased demand for our screen skills is essential to developing a sustainable sector. Large budget productions strengthen Australia’s capacity to produce high quality stories for Australian and international audiences by providing skills development and training opportunities that go significantly beyond what can be achieved on smaller budget productions.’

They hear us, they use our arguments, but they don’t acknowledge and recognise us.

So, here is another reminder. Game development is an industry of the future that will provide highly skilled employees, high paying jobs and the creation of digital exports in one of the fastest growing creative, technology driven sectors within the global economy.  Australia’s game development industry is a sleeping giant and with the right support it can employ thousands of people and add hundreds of millions of dollars to Australia’s GDP. In particular, it can help to build a whole new generation of Australians with vital digital skills. This is not a hypothetical scenario, with Canada and the United Kingdom providing proven and concrete examples of what can be achieved.

We sit in frustration and watch Australians disappear to work in large games studios overseas and accordingly contribute to the export dollars of other countries.  We watch the big game development studios enter successful discussions with governments around the world to establish studios in their respective cities/provinces as so many world leaders recognise the contribution that the game development industry provides can make to their national economies. Importantly, the big thinkers also realise that when these big studios set a base in your country/state/province – real bricks and mortar, they don’t tend to disappear after only one production.  These countries/states/provinces are at the forefront of developing long term, skilled, innovative industries.

We often hear that international studios have Australia on their list of ‘preferred places to do business’. Not only does Australia have liveable cities and infrastructure, we have skilled and talented employees, preferred time zones and we are situated very closely to the largest global games markets in Asia, making us look very attractive on paper.  However, we quickly fall of these ‘preferred lists’ when studios are not offered the same incentives provided in other areas around the world. It could cost a minimum of 30% more to run a studio in Australia.  We lose out to cities like Winnepago, which seems kind of ridiculous….no offence to Winnepago.

It just makes no sense, economic or otherwise.  The Australian film sector has done incredibly well and absolutely deserves continued government support.  It is not in the games industry’s interest to take any of this support away from film.  In fact, many of the skills employed by game and film makers are actually cross-disciplinary and allow for the development and growth of both mediums.    Surely that makes economic sense if not common sense?

It is in our national interest to see the Australian game development industry provided with a level playing field both domestically and internationally to grow the sector in a sustainable and permanent way. It all starts with games being considered and recognised as part of the screen industry.

The original headline for the Minister’s press release offered us hope, although we were brought back to earth quickly! In supporting the games industry, the Minister probably won’t get a photo op with a Hemsworth or a Kidman (even though they probably play games), but can take pride in the fact that the government has laid the foundations in providing a digitally focused, future facing, highly skilled, weightless export industry for a global market that shows no signs of slowing down.  Now that would be a game-changer.