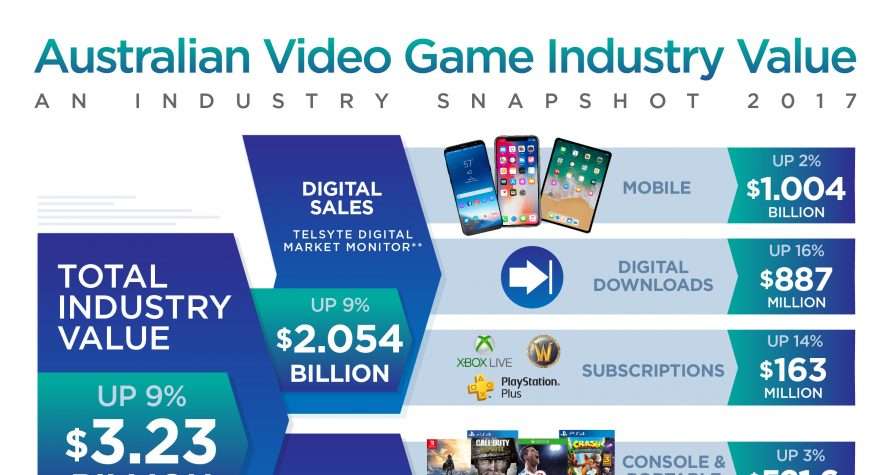 Sydney, Australia – 22 February 2018 – Australians’ love for playing video and computer games continues to skyrocket, with consumers spending $3.23 billion in 2017 on games and hardware, a nine per cent lift on the previous year’s sales.

According to data from The NPD Group Australia, overall physical retail sales increased by 11 per cent. A cyclical upturn and solid performance in retail sales driven by hardware such as the PlayStation®4 (PS4™), Xbox One and Nintendo Switch, resulted in console hardware, console accessories and console software all experiencing growth.

Research from Telsyte indicates total digital sales were up nine per cent, surpassing the $2 billion mark in 2017. Digital downloads, including full game downloads and digital extras, increased by 16 per cent last year. Subscription revenue also continued to grow, up 14 per cent in 2017, with more gamers signing up to PlayStation®Plus and Xbox Live. Mobile game sales retained the majority share of the digital games market, and in 2017 generated more than $1 billion in revenue.

“Despite the huge amount of entertainment options available to Australians, the appetite for games shows no signs of waning, evidenced by growth across the entire industry,” said Ron Curry, CEO of IGEA. “In 2017, we saw gamers embrace new and updated consoles. At the same time, there was lots of love shown and nostalgia for old favourites – both hardware and games. Australians enjoy buying products in-store, where they can seek out hands-on experiences and advice from retail staff, and similarly they are very comfortable downloading full games and additional content.”

Foad Fadaghi, Telsyte Managing Director, said, “While half of all digital related revenues remain mobile, other segments including downloaded console games and subscriptions had a stellar year with double digit growth. Telsyte expects the market to remain strong in 2018 with continued push to digital platforms and subscription models by leading publishers.”

Since 2009, IGEA has provided a review of the state of Australia’s video games industry using commissioned research from The NPD Group Australia. With the growth of digital gaming, the NPD data has been augmented with research from Telsyte to provide a complete picture on the state of the industry.