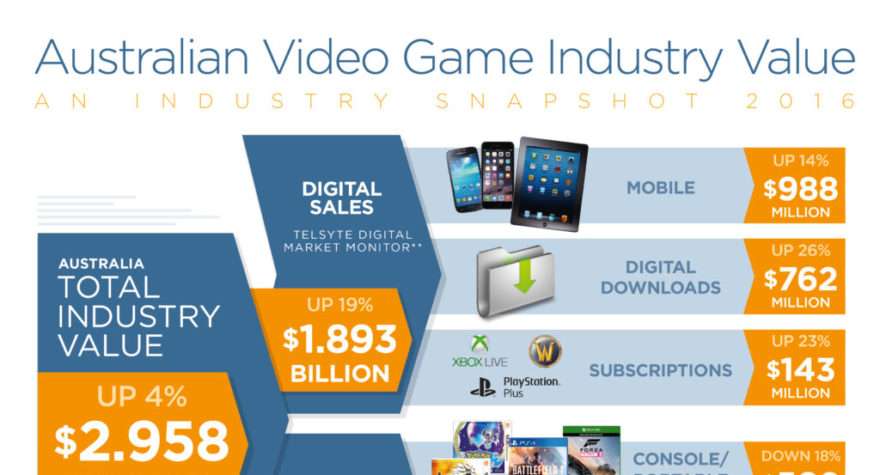 Taking it up a level: Australian video game industry generates $2.958B in 2016

Taking it up a level: Australian video game industry generates $2.958B in 2016

Sydney, Australia – 28 February 2017 – The Australian video and computer games industry generated $2.958 billion in revenue in 2016, a four per cent increase on 2015 sales. According to data released today by the Interactive Games & Entertainment Association (IGEA), the industry saw a total of $1.065 billion in traditional retail sales, with an additional $1.893 billion in digital and mobile sales last year.

Research commissioned by IGEA from analyst firm Telsyte shows overall digital sales were up 19 per cent in 2016. While mobile games remain the largest part of the digital pie, generating $988 million, the largest growth came from downloads, which were up 26 per cent. Downloads comprise of full game downloads and downloadable content (DLC) – the latter of which is increasingly popular (up 31 per cent) as publishers offer consumers new ways to enjoy their game and extend the life of the product.

According to market data from The NPD Group Australia, traditional retail sales decreased 16 per cent on 2015 figures, with declines coming from across the wider category, including both software and hardware. However, the Australian game industry experienced a four per cent spike in total revenues in 2016, with consumers’ digital purchasing habits far outweighing the decline in traditional retail sales.

“The Australian video game industry continues to grow, generating strong revenues just short of $3 billion last year,” says Ron Curry, CEO of IGEA. “In 2016 we continued to see a shift in how consumers engage with and consume our interactive entertainment products. Consumers have once again shown they are receptive to the latest technologies, with virtual and augmented reality games making the move into living rooms and onto mobile devices.”

According to Foad Fadaghi, Managing Director of Telsyte, “Australian consumers are increasingly comfortable buying games and DLC via digital storefronts, with this trend set to continue as more devices get connected via high speed mobile and fixed networks.”

To further supplement this market data, IGEA will be releasing its Digital Australia 2018 report (DA18) later this year, which presents data on the lifestyles, habits, attitudes and demographics of Australians who play computer and video games, as well as how Australians are consuming interactive games in conjunction with other digital technologies.

IGEA has created an infographic to support the 2016 Australian sales data, which you can download here.