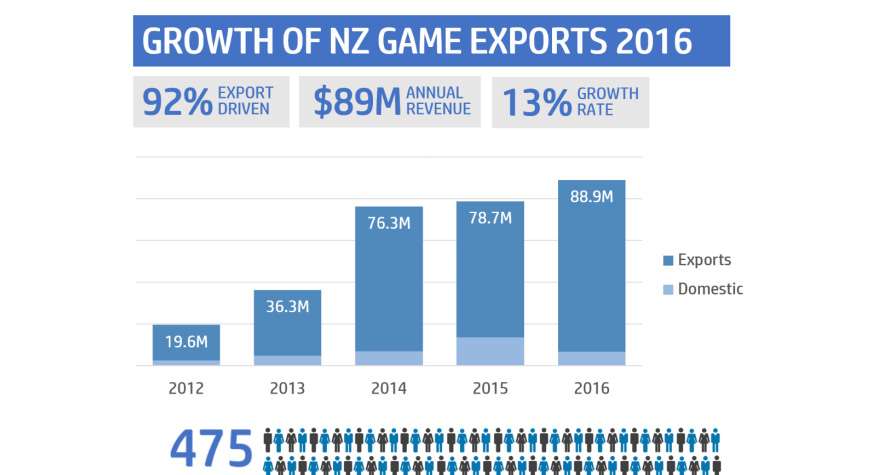 New just out from the NZGDA

New Zealand’s game development industry grew 13% last year to earn $88.9m in the year ending 31 March 2016 according to an independent survey of New Zealand Game Developers Association studios. Almost all of that revenue (92%) came from exports of interactive software and online services.

“The successful New Zealand studios have consistently grown their audiences and attracted fans around the world. They’ve become susta
inable independent publishers and proven that they are not one-hit wonders but are smart digital exporters.”

The industry continued its strong growth even in the face of the closure of the country’s single largest studio, Gameloft New Zealand, in January. Despite 150 jobs being lost as a result of the local subsidiary of Paris-based multinational Gameloft abruptly closing its doors, employment in the sector only decreased by 93 fulltime equivalent jobs to 475 as of 31 March 2016. This suggests the sector created 60 new hi-tech jobs in the last year. New Zealand studios forecast 98 new jobs in the coming year.

“The international investment from Gameloft provided professional experience and upskilling for many developers and artists, at a time when our rapid growth led to a shortage of experienced developers. Many former Gameloft staff quickly joined local studios or have gone on to create their own startups.”

New Zealand continues to be an attractive place for foreign investment. Developer Dean Hall, creator of the multi-million selling hit game DayZ, has chosen to establish his new Rocketwerkz studio in Dunedin. Two other international studios, Climax and Artrix, have also opened offices here in the last year.

The majority of New Zealand game studios are locally-owned and 68% describe themselves as independent self-publishers, a higher margin and more sustainable business model than contract work. By selling direct to players on digital platforms, New Zealand studios enjoy more of the revenue when a game is successful than if they partnered with an international publisher. By comparison, only 25% of studios focus on client contracts.

Small ‘indie’ teams can also be successful and attract international acclaim. In March Wellington’s Dinosaur Polo Club was nominated for a BAFTA as well as four awards, including the Grand Prize, at the prestigious Independent Games Festival in San Francisco for their puzzle game Mini Metro.

The sector employs a diverse range of creative and technical skills, 33% employees being developers, 28% artists, 15% in marketing or management and 10% being game designers.

The survey also unveiled a range of challenges facing the sector. Attracting early stage funding was a challenge for 48% of studios, with expansion capital being a challenge for 35%. The lack of funding options slows growth as studios fund development by expanding products in stages or relying on crowd funding and ‘early access’ presales to help to finish games.

To address this, the Game Developers Association launched its own $20,000 business startup competition, the Kiwi Game Starter with support from Callaghan Innovation. With entries due on 15 August, four finalists will go on to pitch their prototypes and business plans to a panel of judges during the New Zealand Game Developers Conference at AUT University on 8-9 September.