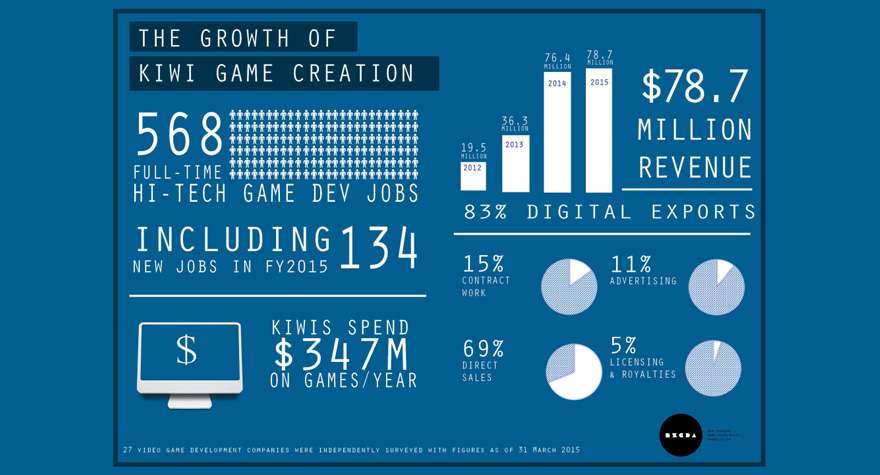 New Zealand’s video game studios created 134 new high-tech creative jobs in the last financial year, according to an independent survey by the New Zealand Game Developers Association.  The sector now employs 568 fulltime employees and earned $78.7m in FY2015, up 3% on the previous year.  82% of revenue came from digital exports.

The survey shows that established game studios continue to do well but the overall sector’s growth has slowed due to a lack of new businesses being established by either local startups or international investors.

In response, the NZ Game Developers Association is running its own startup programme, the KiwiGameStarter, and calling for government screen visual effects schemes to be modernised to attract international video game productions.

“We expect a good year ahead for the established games studios, but we’re concerned that our pipeline of up and coming studios has dried up,” says Game Developers Association Chairperson Stephen Knightly.

“Tellingly, every local games business with more than 10 employees is at least six years old.  We haven’t seen another local success scale up in recent years,” says Knightly.

“Although we have a proven track record, skills and the ability to reach global markets digitally, the survey highlights a scarcity of startups on track to become the next generation of sustainable studios.  Since games are global and digital in nature, with a good prototype it is possible to attract crowdfunding, publishing deals or private investment. But a gap in investment at the early stage is preventing small independent developers from even getting that far.”

To address this, the Association and sponsors have created the KiwiGameStarter where one promising games business will receive funding, software, and business mentoring support worth over $25,000.  A second studio will also win $5,000 plus software.

Playable prototypes and business plans for the competition are due on 28 August.  Details are available on NZGDA.com.

The Postproduction, Digital and Visual Effects scheme offers a 20% rebate on visual effects productions completed in New Zealand.  The government recently announced a reduction in the qualifying expenditure threshold from $1 million to $500,000 to stimulate demand for post-production and smaller visual effects companies.

“Existing programmes could simply be modernised to include comparable games visual effects and generate a greater economic benefit for New Zealand.  Instead of chasing more but smaller visual effects projects, we could attract higher margin, multi-million dollar game projects.  Video game and film visual effects work are comparable and only one criteria needs to be revised to make games eligible,” said Knightly.

27 New Zealand video game developers responded to the survey which was independently conducted by Tim Thorpe Consulting. Figures are for the financial year ending 31 March 2015. 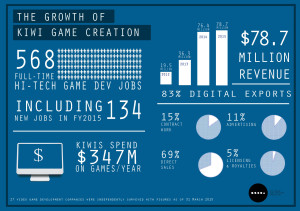