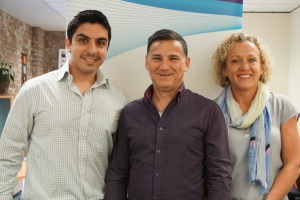 The IGEA team were lucky enough to work with the PAX Australia team for this year’s event. PAX Australia 2014 was so impressive and gave us so many great memories, we just needed to write down our thoughts:

Confession time. I’ve worked over half my life in the games industry. I’ve probably had more ‘free’ games given to me that any one human can play in a lifetime. I speak about games and the industry with passion, daily. I love this industry. But, I’m afraid to say I’m a lapsed gamer! And it’s against this until now only self-professed confession that I attended my second PAX.

My memory of the first was noise, rain, cold, hunger, toilet queuing and fighting for space to conduct interviews. It was fun, but it was hard work. I don’t think I had the time, energy or motivation to experience it as fully and deeply as I should have.  So, as a non gamer expecting to be cold, hungry and full bladdered, I walked into the sunshine of opening day already surprised. Before crossing the first street I was already in conversation with some ‘random’ who was also heading to PAX. He wanted to get there early so he could queue.  Sorry, say again?  To queue?  Quite sensibly, I had made sure I had one of those special ‘I don’t have to queue’ badges. But arriving at the aptly named Queue Room not long before opening, it was clear why my new friend was in such a hurry; this is where PAX started, not where you waited for it to start.

Culture can be defined as the ideas, customs, and social behaviour of a particular people or society. Well, here was the culture of gaming, gamers and games all on display, existing harmoniously together in spite of any differences. From my reading of the gaming press over the past few weeks I was very unprepared for this and for the rest of PAX, because this is how the rest of the 3 days continued. It was noisy, tightly packed, boisterous, colourful and full of good cheer, but without any of the vitriol and anger that was masquerading as the culture of gamers over the past weeks.  From the Queuing Room to the Table Top area this scene would be replicated every hour of PAX – an incredibly diverse group of people celebrating their love and curiosity of an immensely diverse culture.

It’s hard to explain to someone who hasn’t been to PAX what it’s like, as it’s not really like anywhere else. People bump into you and say sorry. People just start talking to you because they can and they are interested. Queuing is kind of cool. No one seems to care if you’re some 50yo wearing a jacket (and a no queuing badge) or a 20yo man dressed in an amazing ballgown, everyone is welcome and welcomed.

Over the years I have taken a fair amount of bashing about games and those who play them. I hear the stereotype way too often. I often find myself defending those who make games which are violent, anti-social, addictive and well, you know the rest as well as I do. PAX on the other hand reflects more clearly those who play, engage and create games. They are diverse, collaborative, creative, sensitive, boisterous and passionate.

So, to the tired, cold, hungry, toilet queuing PAX attendees, participants and organisers I say an unreserved thank you for an amazing three days, for teaching me the joys of queuing and for letting a lapsed (but repentant) gamer be one of the voices of gaming. You can’t get more inclusive than that!

I’ve been looking forward to PAX Australia 2014 since I made the mistake of organising a European vacation that clashed with the historical moment PAX landed in Australia on 19 July 2013. While I suppose cruising the Mediterranean was fun, I’ve spent the last year moping about how I missed Australia’s first PAX and feeling sorry for myself whenever friends and industry colleagues heralded the success of PAX Australia 2013. The last three days I’ve been gifted with a sentiment that was music to my ears, a common phrase that helped me to forget my decision to travel the world in July 2013, a view that was echoed by all. Fans, Cosplayers, enforcers, exhibitors, sponsors and everyone else were kind enough to inform me that “PAX Australia 2014 was better than PAX Australia 2013”. Thank the Cosplay gods!

I was lucky enough to wear a badge that gave me all access to the show, even before it was officially opened to the public. At 9am on Friday morning I walked through the exhibition hall where everything was calm and quiet yet I could tell that the energy in the space was quietly conjuring ready for the 10am opening. Sure enough at 10am – BOOM – all empty spaces and quiet places were instantly filled with happy people and the sounds of excitement. I enjoyed navigating the sea of eager fans throughout the exhibition hall and couldn’t help but notice that, despite the volume of people and how busy each exhibit was, everyone was happy, polite and enthusiastic (some Cosplayers more than others) . The overall mood was extremely positive and I felt incredibly lucky to be part of an industry with such a cool market. Some personal highlights from the exhibition floor were Farcry 4, Battlecry, Evolve, Armello, Bonza, Dragon Age: Inquisition (thanks for the ID card EA), Framed, Media Molecule, Splatoon, Sunset Overdrive and Screencheat (and many many more).

The panels at PAX were a pleasant surprise.  I went to a range of different panels including, “Serious Games for Serious Issues: More Than Just Having Fun”, “Political Proactivism for Geeks”, “Learn to Play, Play to Learn: Video Games in STEM Education”, “BATTLECRY: Welcome to the WarZone”, “Grow Up and Take Responsibility!”, “Game Industry Trends – beyond 2014” and “Unlocking the Fourth Wall: Transmedia and Games”. I say I was pleasantly surprised because prior to PAX I considered many of my planned panel sessions to be a little tame, serious and perceivably boring compared to the other entertaining options that were available throughout PAX (i.e. meeting developers and playing games). I was delighted to see that all of the panels, even the more ‘ serious’ ones, were very well attended and fostered some robust and productive conversations about important topics for this industry. The panels were really impressive with some fantastic speakers, interesting topics and really engaged audiences. With the assistance of the enforcers, PAX Australia’s panels set the standard for how panels should be run at any event.

The final part of PAX I’d like to commend is the location. The Melbourne Convention and Exhibition Centre was a perfect location for the event – not only for the exhibitions and panels but for the easy access to everything else Melbourne has to offer. I’ve had some fantastic food and wine over the PAX weekend and let’s just say I’ll have to do a few more situps and pushups this week to compensate.

Congratulations to the PAX team for putting on such a great event – I’m looking forward to 2015 and beyond. I’ll be sure to avoid booking holidays until PAX Australia dates have been confirmed.

Wow – just wow.  What an amazing experience PAX Australia 2014 was and today I almost feel a bit sad that it has come and gone already.  I knew PAX would be amazing this year simply by looking at the line up, coupled with our experience last year.  However the new venue and larger crowd added so much to the overall experience and vibe of the event.  So many happy, polite, engaged and amazingly ‘cosplayed’ people in the one space celebrating games is a sight to behold.  The PAX team and all who contributed including the Exhibitors, the Panelists, Enforcers, and of course the Organisers deserve to be congratulated.

The highlights for me:

The overall vibe of PAX has to be experienced to be believed.   So many people walking around so happy, so polite, so engaged, stopping and taking photo’s of other Cosplayers or simply acknowledging just how much they love their costumes as they walk past.   PAX just felt like a giant, happy festival about the industry I work in, and one which I am so grateful to be a part of.  Bring on 2015

And last but not least, here are some thoughts from Jeff Brand, the author of DANZ reports; 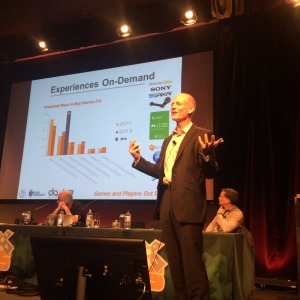 Unfathomable to the 30 percent of Australians who say they don’t play computer or video games, PAX is a cultural event every bit as relevant to the health of society as sport and economic development. Women, men, girls and boys navigate a playful labyrinth of isles and stalls, dressed in Cosplay (fancy dress for the less game literate) participating in the joy of vibrant play and story. They apply innovation, strategy, cooperation and healthy competition in sublime joy and social cohesion. Cameras and phones always in hand, delegates stop one another to admire and revere elaborate costumes.

If only the halls of power and the engines of enterprise could run as potently and smoothly as an expo celebrating games, play and culture. The power of play elevates the human spirit and it extends beyond video games to board games, card games, spontaneous games (beach balls and simple rules make for instantly shared objectives), and popular culture icons from film, television, comics, and books. The love of play attracts delegates to brilliant panels on serious games, retro games, game design and games in schools and the economy.

Careful observers of history and society know that games foster social cohesion, common identity, strategic literacy and resilience – characteristics necessary to drive innovation and the knowledge economy. It’s time to get play on the national agenda.