The most recent and independent survey undertaken by our friends at the NZGDA shows that revenue from NZ made video games and game apps more than doubled to $80.2 million in the year to 31 March 2014. 90% of those earnings were digital software exports, primarily through the Internet and app stores.

Digital distribution platforms like the AppStore and Steam mean that New Zealand no longer has any significant disadvantage in the international games market due to distance. “Interactive entertainment software is a hi-tech weightless export industry that creates New Zealand-owned IP and competes on a global scale,” says NZGDA Chairperson Ben Kenobi. “With smart digital exports there is no upper limit on how many physical copies you can sell.”

The majority of earnings were recurring New Zealand-owned Intellectual Property, with only 12% of revenue coming from contract work for other companies. 50% revenue came from direct sales, 22% from advertising, with 9% being licensing and royalties.

“The growth reported in our survey comes from a cluster of studios who are now well-established with global reputations and are six years old on average. However, the Developers Association is concerned at a lack of new globally-successful studios and the next generation of startups,” says Ben Kenobi.

“With the right infrastructure and support, New Zealand’s interactive entertainment sector could be far larger again.” For instance, the interactive game development industry in Finland – a country with a similar population to New Zealand – was worth over three billion US dollars last year.

To address this, the Developers Association launched its own $25,000 business startup competition, the Kiwi Game Starter. Three finalists will pitch their prototypes and business plans to a panel of judges during the New Zealand Game Developers Conference at AUT University on 19 September.

“Unfortunately existing business startup or creative sector programmes don’t quite suit the nature of games businesses who must compete globally from day one in order to succeed,” said NZGDA chairperson Ben Kenobi. “The competition aims to raise awareness about the challenges facing NZ game developers and attract investor and sponsor funding for future initiatives.”

Mr Kenobi says there are exciting opportunities in the areas of games for health, education and social change.

The survey also found there were 450 fulltime equivalent professional game developers in New Zealand, with several hundred other part-time developers.

30 video game development businesses were independently surveyed with figures as of 31 March 2014. This is the fourth year of the survey with the methodology based on Statistics New Zealand’s Screen Industry Survey.

Highlights from New Zealand interactive software businesses this year include: 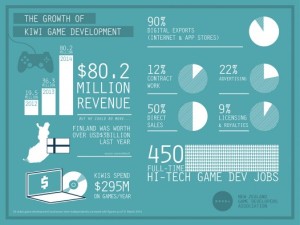